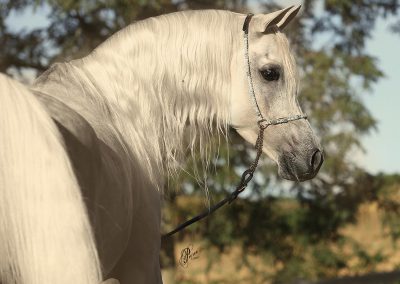 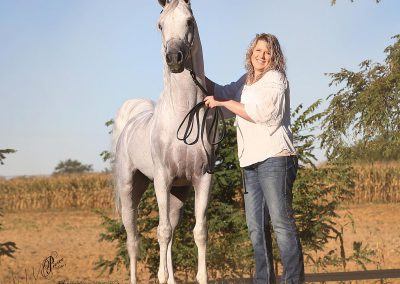 After six years in solitude at a Pennsylvania boarding stable, and the death of his owners, Quiet Man has a new life, thanks to two women from his past who couldn’t forget him.

In the quaint little town of Eatonton, Georgia, John and Susan Fox of Equinox Arabians had a small Egyptian Arabian breeding program. In 2007, their mare Falada EQ (Gatsby CC x Theminstrils Aria) foaled a colt by PVA Kariim (Imperial Imdal x BKA Rakiisah). “Falada was named after the talking horse in the Grimm’s fairy tale ‘The Goose Girl,’” says Susan. “When her colt was born, Falada refused to nurse him and treated him with her ears laid back and her nose squinched. She finally relented and nursed him for a week, but then she lost her milk. She was able to raise him, though, along with the help of another mare. We just bucket fed him.

“I felt that this little colt needed a strong name. My husband and I have always loved the movie The Quiet Man, with John Wayne. I thought the name fit him. I hoped he would be a lot like the John Wayne character in the movie, who was always a gentleman, but prevailed in the end.

“I can’t tell you how pleased we were with him. He was the sweetest thing. He’d just jump right up and show off. He had that charisma along with the calm, sweet, gentle attitude. That’s what he was born with, along with very pretty, wide set eyes and beautiful black skin. His nickname is Blue … he’s a horse that gets under your skin.”

In 2011, Quiet Man was named Egyptian Event Straight Egyptian Specialty First Place Stallions Four Years Old. And that’s where he met another woman who fell in love with him.

Shortly before the Event, Arabian breeder, trainer, and special education teacher, Cindy Jewart, wanted to hone her halter skills and asked Steve Dady, Quiet Man’s trainer, if he would help her. “He asked if I wanted to go to the event and work for him there,” she says. “He brought 40 horses, and it totally blew my mind. I had never seen an operation like that. I was trying to be as helpful as I could, and it was like, ‘Bathe this one, bathe that one …’ Quiet Man was there, and I always grabbed him first so I could bathe him, and the only thing I could think about was riding him. Blue’s maternal grandsire, Gatsby CC, was there too, so I saw a part of his family, and I started to learn about his heritage.

“I contacted Susan Fox after the event and told her I would love to breed to him. She told me he’d just been sold to Dan Taiedi of South Park, Pennsylvania, and that he was hard to get a hold of. She was right, I tried, but didn’t hear back from him. Still, I always stayed connected to ‘Blue.’ I would watch his videos, and Google his name and try to figure out what happened to him.”

Quiet Man returned to the Egyptian Event in 2012, but foundered at the show. Right around that time, Dan Taiedi’s wife died, and four years later, in 2016, Dan Taiedi died.

In 2017, Susan finally heard that news and learned of Quiet Man’s unfortunate living situation. “My husband and I considered buying him and bringing him home, but we were not in a position to stand a stallion,” she says. “So I worked hard to find someone to buy him. I remembered that Cindy had called me some years ago wondering where he was.”

“Susan rang me out of the blue to tell me the news,” says Cindy. “She had finally tracked down the daughter who had inherited the horses. She was not a horseperson and was overwhelmed. The eventual deal was consummated thanks to Susan, who still cared for Quiet Man. She made all that effort and told me, ‘We might be able to work this out.’

“I wanted to see him and make sure he was OK. I drove to the boarding stable, and I saw Quiet Man and his gelded son who was there, too. Quiet Man was all alone in a far stall, and once in a while, he got turned out in the indoor arena or got longed.

“I remember his eyes, his mane, from that visit. And I knew I wasn’t going to rest or sleep again until he was where a horse should be, with other horses. I knew this, too: the world needed to see him. Susan had a vision in mind when she bred him. She knew the result was going to be special, and whether colt or filly, it shouldn’t be locked away and hidden. Those PVA Karim sons were all amazing, but there are no more. They’ve either been exported or passed.”

In July 2017, Cindy and her husband Matt, went to pick up Quiet Man and his son and bring them home to their central Pennsylvania farm. “He hadn’t been messed with in at least a year,” says Cindy. “When I led him down the path to the trailer, I could feel that he wanted to come unglued — he was so excited to see other horses. But he jumped right on the trailer, with his son in the first stall; an empty stall between them. His little son had never been on a trailer. I do a lot of trailer loading, but I wasn’t sure what we were going to get. I did five minutes of ground work, brought him up to the trailer, and he was in.

“To finally have Quiet Man in my trailer after all those years of thinking about him and looking for him was surreal. As we pulled out, his son was excited, kicking the trailer. I told my husband just drive, and we’ll pull over a little ways down the road. We stopped, and I checked on both of them and thought to myself, ‘There he is. In my trailer. He’s really mine.’

“And then I bawled.

“I believe in Jesus and I believe there is a purpose and things work out for the good, but so many things had to fall into place for this to happen. Even the stallion experience that I have now prepared me for this moment. And being able to come up with the purchase price … I knew he was for sale in 2012, but I couldn’t afford him. Even then, it was a dream. A distant dream.”

But now Quiet Man was home, and Cindy had a new concern. “I wondered if he was going to be mean or hateful because he’d been kept away from other horses. I thought he’d need an adjustment period, or be crazy when he saw other horses. But he showed me something else. He was still sweet, never turned his butt to me in the stall. I opened the stall door and he came right to me, lowered his head so I could put his halter on.

Once Quiet Man settled in, the first order of business was his feet. “He’d had no farrier work for a year,” says Cindy. “I had both my vet and farrier out and we trimmed and shod him together. An x-ray, and trim, x-ray and trim. We’ve had zero problems. He’s sound. Next was nutrition. My husband is an animal nutritionist. His specialty is dairy, but he does horses, too, and we addressed his diet. And yes, there will be mares to breed. His fertility is good.”

It’s been a year now, and Quiet Man has happily adapted to his new life. “He just has a stall guard in front of his stall. He can see everybody,” Cindy says. “He’s so content.”

Cindy has started him under saddle, and now she has yet another dream. “I want to take him to open shows. I want him to be an ambassador for the Arabian breed. You don’t even have to be an Arab person to be attracted to him. There is something about him. I will let him choose the discipline. We’ll just play. It could be sport horse, hunter, dressage, or western. Whatever Blue wants to do, that’s what we’ll do.”

Quite a story, but it’s far from complete. As we go to press, Quiet Man is in training with Ted Carson for the Egyptian Event in 10 and over stallions. “Ted was another piece to this story that fell into place,” says Cindy. “When I asked if he’d take Quiet Man, he remembered him from all those years ago. All the hundreds of horses that go through Ted’s barn and he remembered Quiet Man? He said, ‘We’re excited, we want him.’ I was a little star struck.

“I know Blue’s going to show off his natural beauty and what he brings to the table. And we’ll have a little party for him — after all, he’s earned it. From there, he’ll come home with me and we’ll ride.”

So it seems, just as Susan hoped when he was a little bucket baby, The Quiet Man, always a gentleman, prevails.

Keeping Faith – A Story of Loss and What Was Found