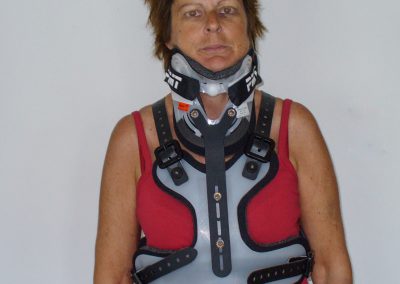 My mug shot the following day. My eye started to blacken and my nose hurt too. Obviously my hair wasn’t combed either. 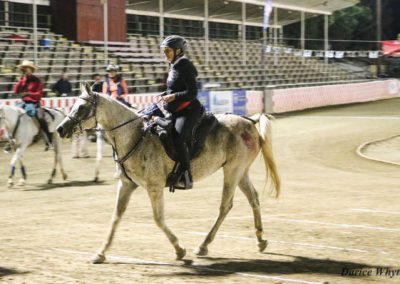 “… the next moment I was headed in the opposite direction at blazing speed, only now I was hanging from the side of the saddle like a circus rider.”

You know how the saying goes — some of us learn from other people’s mistakes, and the rest of us are the other people. Well it seems that I’m in the “other people” category fairly regularly!

When I decided to buy Tia, I didn’t even consider that she’d had a month’s training and that I hadn’t ridden for 30 years. I could ride, right? Well, big wrong!

I started riding her out on trails almost as soon as I got her, and we had some rather anxious moments, but I managed to get back to the boarding stable unscathed.

About six weeks after I got Tia, I went riding with a friend who also boarded at the stable. It was a lovely morning in May. Mother’s Day actually. We had decided we would head over to a local park a few miles away and head back. As we were riding along, Tia seemed to be getting a bit agitated. I now realize that pulling on the reins while squeezing with my legs to hold on was not the thing to be doing with her.

As we waited to cross the road, a farmer’s three dogs came rushing down the lane barking at us. Obviously, we were invading their territory, and they were making sure we knew.

I remember I got her head turned slightly to slow her, and then I was catapulted into the air, landing head first in the prairie field. Another circus act that I sadly failed. As I lay there in the dirt, a number of thoughts ran through my head. The first being, “Get up and get back on that horse.” The next one was, “Wow, this hurts quite a bit more than when I was a kid!”

As I lay there, I drew a bit of a crowd. Nobody wanted to come too close as my dog, a small Springer, was barking at anybody who tried. I assured them she was just afraid and was harmless. I could hear them discussing what to do with me. Ambulances are expensive, don’t move her, etc. I told them I had medical coverage, so could someone please call an ambulance. I was pretty sure I needed medical assistance to get up from the ground.

As I lay there, I seriously hoped I was being a drama queen and that I was wrong about what I thought might be a few broken bones. Meanwhile, Tia was long gone. My future husband had been notified and went to find her. He spotted her by the side of the road, calmly eating. As it was a bit of a trek back to the barn he did contemplate riding her back rather than leading her. It’s a good thing he had second thoughts as he doesn’t ride, and both of us in the hospital wouldn’t have been a good thing.

After a bit of a wait, firefighters trudged into the field to get me. OK, I shall digress here just a bit, but I think they sent the ones that go on those calendars. Here I was surrounded by all these model-material men, and I was probably looking like road kill. I did briefly consider burning down my house in the near future.

They got me loaded onto a backboard, and off to the hospital I went. They had to move me from one bed to another, and when they lifted me enough dirt fell from me, from goodness knows where, to start a small garden! When they removed my helmet, a further cascade of dirt fell. I began to feel like Pig Pen, and I apologized to anybody who came near me for the pile of dirt beside my bed.

A bunch of hospital tests later, it was confirmed that I had broken two of the vertebrae in my neck: the first one that controls breathing and the fifth one. I had three doctors tell me I should have died in the field or, at least should be paralyzed from the neck down. Well, my guardian angel was riding by my side that day — maybe not fast enough to keep me totally out of harm’s way, but close enough to keep me on the right side of the grass.

It was determined that I wouldn’t need surgery, so a neck and chest brace would be my new fashion accessory for the next eight weeks. To say I was depressed would be an understatement. It was early May, and the majority of the ride season would be gone before I could ride again. And I knew I would ride again.

Tia was sent for more training, and, once I was able, I started riding again, but this time I took lessons. The first time I galloped through an open field I did contemplate getting off and throwing up, but I made it without major injury! A major hurdle behind me.

It was a good two years before I was ready to tackle Tia again, but now I was a much more proficient rider. My family really didn’t want me riding her, but I assured them I would never ride her off the property. Needless to say, I didn’t stick to that pact for very long.

Tia, always the drama queen, made riding an event. I’ve been told you never learn anything with the easy ones, and I agree. Tia wants to be sure you are worthy of being on her back.

Tia likes to do things the Tia way: fast and in the front, as obviously, nobody else knows the way! We had many disagreements over our speed, and she mastered the art of cantering on the spot and leaping into the air while kicking out. I had my very own Lipizzaner. She was a handful, but nobody could ever say she was a boring ride.

We have come a long way from our rather sad beginning. Tia went from being the unpredictable one to my go-to horse. She will never be a beginner’s mount as she is just far too feisty and will totally take advantage of her rider given the opportunity.

Tia still does not like dogs rushing at her. The park where I ride has lots of people out with their dogs on a regular basis. Tia considers all dogs to be wolves with leashes. I did draw the line when she spun as a dachshund came charging down the trail at us. Seriously, Tia?

The trainer who took Tia after my accident told me he didn’t think she would be the trail horse I had hoped she would be. Since Tia wasn’t spooky and is incredibly smart, I just believed we got off to a bad start due to me, not her. When we completed Tevis, I made sure I emailed him to inform him of our accomplishment. I’m pretty sure he didn’t see that coming.

I am fully aware that a lot of people would have quit riding right then and there. That’s where I fall into the “other people” category once again. What doesn’t kill you generally gives you a good story! 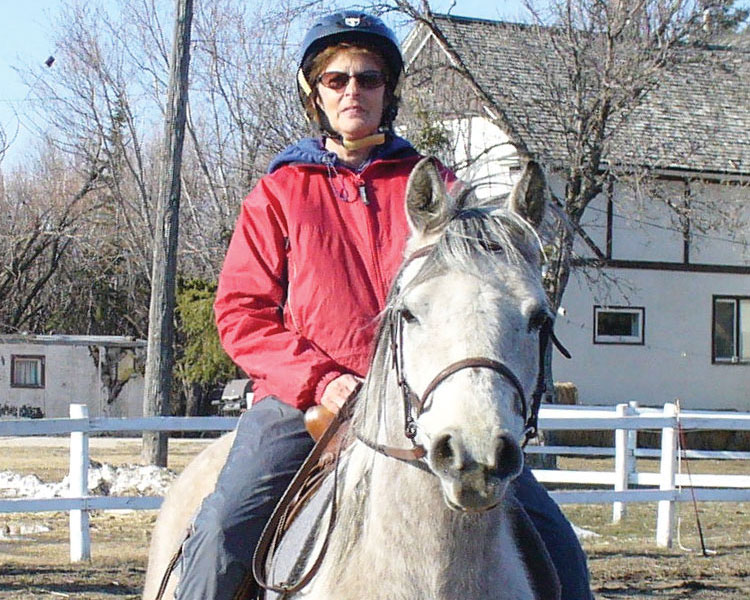