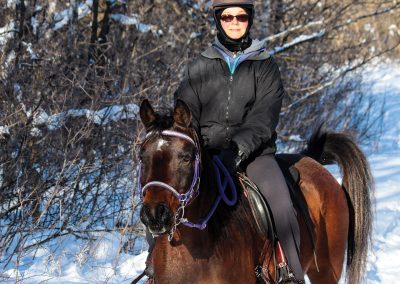 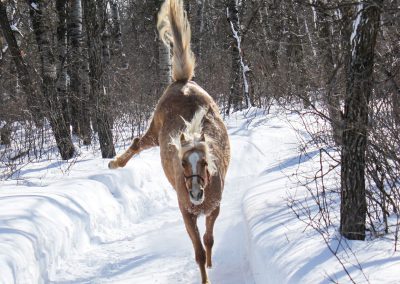 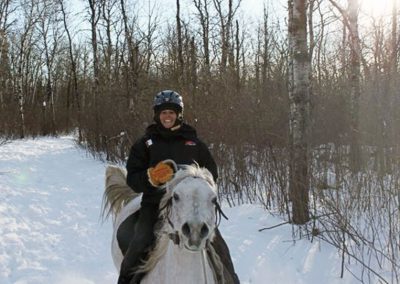 Beau Tia Maria (Albatross x Beau Brandy) aka “Tia” looks like she wants to kill someone and I’m grinning like the village idiot. It makes me laugh every time I see it.

The Amusements of Winter Riding

When you live in the Great White North, you have to find ways to amuse yourself. One of those amusements is winter riding. As we seem to have winter for endless amounts of time, you have to embrace it, or so I keep telling myself. The best way to enjoy it is to suck some other unsuspecting rider into coming with you. Misery does love company. I do draw the line at riding in minus 25 degrees though. That’s cold regardless of whether you’re talking Fahrenheit or Celsius!

Over the years I have had frozen fingers and toes so have discovered the benefits of using hand warmers and, more recently, heated insoles inside my Sorels! Where were those when I was a kid? A balaclava under the helmet helps keep one’s face and ears from freezing off. Layering clothing under a parka is also important, and if you get too hot, you can take a layer off, toss it on the nearest snowbank, and pick it up on the way back. It’s reasonably safe to think it will still be there when you come back, as few people are crazy enough to venture out into the cold, and the chances of them wanting your sweaty clothing are pretty remote!

Once you’re all bundled up, it’s almost next to impossible to walk, let alone get on your horse. You have to shuffle over to your horse and hope that you don’t fall down, as getting back up might not happen. You resemble the Michelin Man, but with a helmet. If you’re lucky, you have a strong friend to toss you aboard your horse. Snowbanks are handy mounting blocks, though.

On a nice sunny day, once you’re into the trees, it truly is wonderful. The trees block the majority of the wind, and if we don’t get too much snow, there are lots of trails to ride, including the ones the deer use.

Our trails do get cut back in the winter unfortunately, as some of them get commandeered by the cross country skiers, and another couple of loops are lost to snowmobilers and the dog sled teams. The horses get used to the snowmobiles rather quickly, but the cross country skiers tend to spook them. I assume it’s because the skiers are usually very quiet unless they’re shouting at us to stay off their trails. Apparently we leave ruts and make it harder to ski. Hello? Aren’t you out there for exercise? Some of the skiers are like a chihuahua with a bone — better left alone! Anyway, we do our best to avoid the ski trails.

The dog sleds are a totally different story, at least for my mare, Tia, who wants nothing to do with those Hounds from Baskervilles! She is sure they are out to get her. I tried unsuccessfully to follow them once. We ended up going backward down the trail at a pretty good clip. Just for giggles I’ll try it again this year. I’m like that.

One year the snow was so deep that when my friend came off her horse there was a great cloud of snow and she almost completely disappeared! We thought we might have to leave her there until spring, however, she managed to resurface. She did say it was one of her softest landings. It was like a snow airbag.

My strategy when riding after a snowfall is to be second, or preferably third, in line. That way the first two riders have been showered with all the snow from the trees and you don’t get the snow down your back. Make sure those riders are taller than you or that strategy will backfire.

Last winter we had rain in January, which then turned into sheer ice. The trails were a mess and frightening to ride. I’d sooner ride a runaway horse than ride a horse over ice. We then had to search out different trails, but it seemed that each one required crossing a skating rink! I was never so happy to have spring come to get rid of the ice. No repeat of that is necessary.

Riding through deep snow is great conditioning for the horses. If one of the horses is a bit too exuberant, then a bit of snow plowing helps take the wind out of their sails. Occasionally, there will be one who thinks it’s a great idea to roll in the snow! There have been a few unplanned dismounts when an itchy, sweaty horse thought that was a great  plan.

I have had a number of people remark about not getting their horse sweaty in the winter as they will catch a cold. My response to that is pshaw! I’ve never worried about that. If they get sweaty, and usually they do, we throw a fleece over them to help them dry. If it’s sunny, they like to stand in the sun to dry off, or I throw them in the barn for a bit to help dry them. Not once have I had one of my horses have even a sniffle from winter riding, and I’ve been doing this for 10 years.

If you get the chance to winter ride, try it. The fact that there are no pesky mosquitoes makes it worth the effort. Dress warmly, making sure your fingers and toes are well insulated. Drag your friends along to try it with you. You may find you actually enjoy yourself!