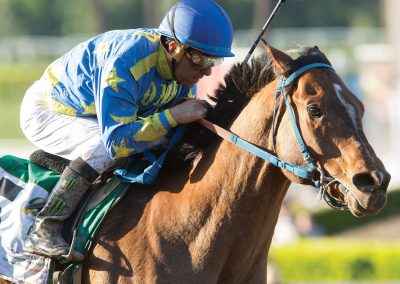 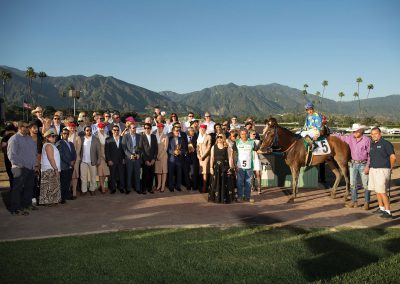 Paddys Day was the first Arabian racehorse that famous Thoroughbred jockey Victor Espinoza encountered up close. Espinoza, who has won three Kentucky Derbys, most recently in 2015 with American Pharoah, is quick to admit his background with Arabians is limited.

“The only time I’d been close to an Arabian horse was when my ex-girlfriend had one, but it wasn’t a racehorse,” he recalled in early   April. “I never thought I’d come close to riding an Arabian horse.”

Espinoza gained the mount after informing his agent, Brian Beach, that he was willing to participate in the race after learning that race sponsors, the Sheikh Mansoor Global Flat Racing Festival, led by Lara Sawaya of Abu Dhabi, and Santa Anita Racetrack, under the direction of track president Keith Brackpool, had donated $150,000 to the Permanently Disabled Jockey’s Fund. The PDJF is a charity that aids North American jockeys and exercise riders who are injured in races or morning exercise.

“That’s the reason I decided to ride the race,” Espinoza said. “I thought, that’s pretty cool. I will help them. I will ride one.”

Espinoza, 44, had simple instructions for Beach.

He got the best one.

Paddys Day (Burning Sand x AK Loretta by *Virgule Al Maury) won the HH Sheikha Fatima Darley Awards Stake by a convincing 3 ¾ lengths over Easter Man (Burning Sand x Angel Proof by NF Proof). Less than 24 hours earlier, Paddys Day was honored with the Darley Award as the 2016 Horse of the Year, a title he won in 2015. His win at Santa Anita put Paddys Day at the top of the list of contenders for the 2017 award, albeit with many months of racing still to go before voters form their final opinions. Paddys Day races for Scott and Lori Powell’s Quarter Moon Ranch and is trained by Scott Powell.

The race lived up to expectations, drawing a field of 12 runners from throughout the United States. Easter Man, the Champion Four-Year-Old male of 2016, was part of the field, as was Thess Is Awesome, who won the 2016 Darley Awards Stakes in a 46-1 upset.

Paddys Day was the 7-10 favorite on the basis of his career record and win in the Sheikh Zayed Cup at Sam Houston on March 4, a one-length win over Easter Man. Paddys Day broke from post five in the Darley Awards Stake and rallied from the back of the field to win.

As the first half of the race unfolded, Espinoza was surprised at the way Paddys Day felt. Riding an Arabian was a different experience than a Thoroughbred.

“When I broke out of the gate, I thought he’d be faster,” Espinoza said. “He broke a little slow. The way I’m used to seeing other horses run in front of me, Arabians run with the tail a little higher. I thought, what’s going on?”

Easter Man was in front of Paddys Day and quickly became a target for Espinoza. On the turn, Paddys Day was racing on the inside of the field behind three other horses. Espinoza knew a patient approach could be the difference.

“I decided to follow the other favorite,” Espinoza said. “He was doing all the dirty work for me, trying to find his way around. He was the only one running with more power than any other horse.”

“I knew in the end everyone would get tired and I’d find my way out,” Espinoza said. “In the stretch, in the Thoroughbred races, they’re quick. I thought he’d do the same thing. Slowly, he was moving along.

Paddys Day won comfortably over Easter Man, owned by Joe and Betty Gillis of Mississippi, who attended the race. Easter Man is trained by Jerenesto Torrez in Texas and is based with Terri Eaton for his California starts.

“He wasn’t quite good enough,” Joe Gillis said. “He did good, though.”

Gillis was quick to point out that he and his wife bred five of the runners in the field — Dream Pearl, Easter Man, Ivory Shores, Lil Dude AA, and Sand Victor.

“We were well represented in the race,” he said. Easter Man was 9 ¼ lengths clear of Sand Victor (Burning Sand x *Vague de Gemme by Baco du Cassou). Sand Victor, trained by Eaton, is the last horse to beat Paddys Day in the United States when they were first and second in the Sheikh Zayed Arabian Cup Stakes at Los Alamitos last September.

Eaton said Sand Victor improved from his race in Sam Houston and that the trip to the Middle East last fall took its toll on the now six-year-old.

“Sand Victor did really well,” she said. “I didn’t have quite enough time after Abu Dhabi. I had to give him some time off. It was a stressful trip.”

The race was enthusiastically received by bettors who wagered $628,850 on a variety of bets. A $1 bet on the superfecta, correctly selecting the first four finishers in order, paid $114.40.

Scott Powell said the win provided a sense of satisfaction after a loss to Thess Is Awesome at Santa Anita in 2016. Paddys Day has won at venues as diverse as Arapahoe Park, Churchill Downs, Delaware Park, Lone Star Park, Sam Houston and now Santa Anita.

“It’s a huge relief,” Powell said. “We felt good last year and we did it this year.

“I told Victor, ‘He won’t break like you think he will, but he’ll keep going.’ That’s what happened. I hate to say it, but I wasn’t worried all the way through. I always thought we had them.”

This year, Powell plans to take Paddys Day to Delaware Park for the summer in an effort to build on the success at Sam Houston and Santa Anita. The quest for a third consecutive Horse of the Year title is underway.

Steve Andersen is a correspondent for Daily Racing Form