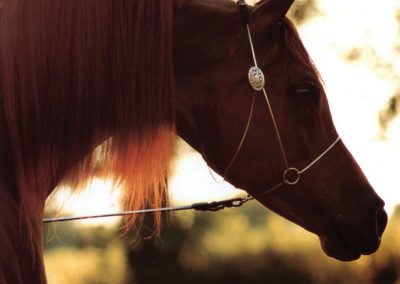 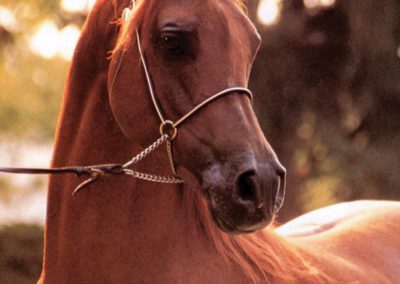 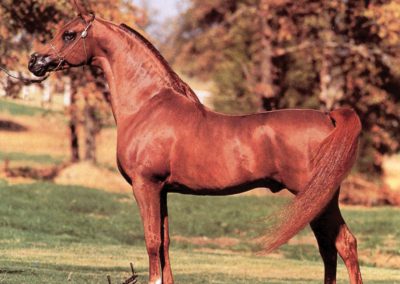 In 1986, a brilliant red Australian-born stallion made the long journey to the United States from the United Kingdom. The heavily Crabbet import featured the beauty of his heritage through his short, wedge-shaped head, square body, tight coupling, incredible substance and ample bone. Prior to his importation, the stallion captured the title of British National Champion twice. His name was *Ralvon Elijah (Ralvon Nazarene x Mill Hill Sharmal) and he inspired breeders on multiple continents.

*Ralvon Elijah has continued to captivate breeders today as his bloodlines offer a source of attributes that are becoming scarcer in modern breeding pools. His descendants have been powerful additions to working western programs for some time, but *Ralvon Elijah, who earned his performance qualification (required at the time to compete at the U.S. Nationals in senior stallion halter) in dressage, has also kindled excitement in the sport horse arenas.

One such star is the exceptional stallion Taez, a 1989 *Ralvon Elijah son out of Serenado by SX Coronado, who earned stallion breeding approvals with ISR/Oldenburg NA, the American Trakehner Association, and the American Warmblood Society. Taez is a multi-National Champion, whose career highlight was his 2008 Sport Horse Nationals Grand Prix Championship.

Granger Durdin-Pugh of Magic Moments Stables, the current owner of Vanguard Crusader and breeder of two Crusader offspring who captured titles at Sport Horse Nationals in 2016, shared similar sentiments on the value of *Ralvon Elijah blood. “When I met Tracy Vann and was introduced to the Ralvon lines, I fell in love with their trainability and the athleticism. They have durable joints and great work ethics. They are always ready to do more than you ask. Ralvon horses are so honest, they help generate interest in the Arabian horse. They help keep the breed strong in mind and bone — we need to keep these horses around.”

Multi-National Champion sport horse in-hand winner and Sport Horse Show Hack Top Ten Ralvon Crusader has become a cornerstone in Granger’s program. “Crusader is an incredible athlete with an enormous heart,” she says, “He has a great work ethic and such willingness to learn and please. He has solid conformation, lofty shoulder movement and a really nice strong and short back. He uses all four corners really well when he is under saddle and has great hock movement. He is upright enough in the front end to get his shoulders up when you are asking for collection, and he’s easy to supple to get correct bend and impulsion. It is so nice to work with a horse that is designed for the job. He has the balance, cadence, and rhythm that is needed for collection and looks fancy doing it.”

As a sire, Granger says, “Crusader has passed on to his get his strength in bone, his great willingness to please his handlers, his gaits, and movement.”

Tracy’s first opportunity to win a National title with a horse she owned came at the 2016 Nationals when Vanguard Mordechai captured multiple rose garlands in the in-hand division. Tracy said the win meant, “Validation that I wasn’t crazy! I had been doing my ‘own thing’ for quite some time. I was breeding what I found to be important and pleasing without regard to what anyone else was doing. Mordechai’s win didn’t come about without an enormous amount of hard work, immense sacrifice, and a great deal of determination.”

Vanguard Arabians is focused on producing quality performance prospects while keeping the legacy of *Ralvon Elijah carefully through thoughtful breeding decisions. Magic Moments Stables, on the other hand, focuses on driving new enthusiasts to the breed by being a source of amateur-friendly riding horses. Both programs have found a common source to achieve their goals: *Ralvon Elijah and his wonderful descendants.