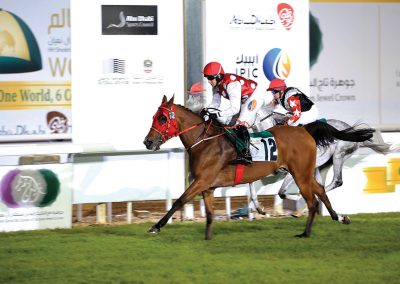 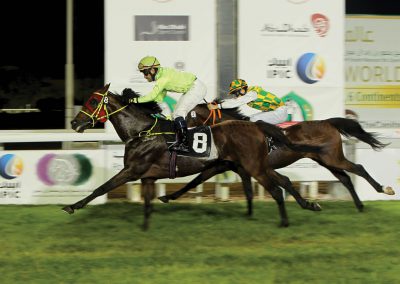 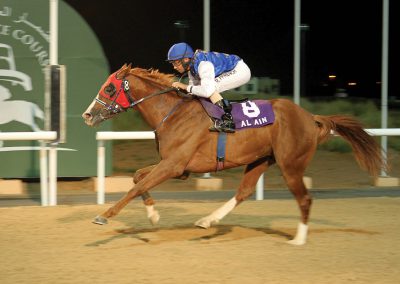 RB Burn won the Jewel Crown at 1,600 meters, or about a mile on turf, over a world-class field that included Al Mourtajez, the highest rated Arabian racehorse in the world, and Paddys Day, the 2015 Darley winner as the American Horse of the Year. They finished sixth and eighth behind RB Burn, who picked the perfect day to run the race of his life.

“What an amazing feeling,” Avranche told the press. “We thought he would run well as his work had been good. Obviously, this is a race we all want to win and it is a great result for the whole team.”

The Sheikh Zayed Jewel Crown is the final seven-figure race of the year for Arabians worldwide, but kicks off the 2016-2017 United Arab Emirates racing season for Arabians. The season continues until late March, with major stakes in Abu Dhabi and Dubai on a monthly basis. Not far away, Qatar has started its wintertime season at the Qatar Racing and Equestrian Club. That season culminates with major stakes in February and March.

RB Burn was bred in Florida by Dianne Waldron, who also bred RB Dixie Burning. RB Burn was well suited to the Jewel Crown distance. RB Burn has won three of nine starts, beginning with a maiden race at Sam Houston Race Park in early 2015. By that summer, he was racing in France and later finished second in the Group 1 Qatar Total Arabians Trophy des Poulains at 2,000 meters, or 11/4 miles, for three-year-olds at Saint-Cloud Racecourse in Paris.

RB Burn won a minor race at the start of the 2016 French season and was fifth in the Group 1 Qatar Derby at 2,000 meters at Chantilly Racecourse in June in his final start of the year in the country. RB Burn won the Sheikh Zayed Jewel Crown in his first start in nearly five months. The shorter distance was vital, Lemartinel said.

“He had a lot of speed,” he said. “He was pulling hard over long distance races and didn’t have much luck in some of the races in France.

“I thought his optimum distance was 1,600 to 1,800 meters. We also had blinkers on him for the first time because when I saw him in France, he was looking left and right. He concentrated on his job in the Sheikh Zayed Jewel Crown.”

The race drew 11 Grade 1 or Group 1 winners in a field of 16, including three American-based runners — Paddys Day; Thess Is Awesome, who won the Grade 1 President of the UAE Cup at Sana Anita in March; and Sand Victor, who won the Grade 2 Sheikh Zayed Cup at Los Alamitos in September.

There was no betting on the race, but Al Mourtajez would have been favored on the strength of his win in the Group 1 Qatar World Arabian Cup at Chantilly Racecourse in October and domination through the year.

Thakif had the early lead in the Sheikh Zayed Jewel Crown, with RB Burn racing just off the pace. RB Burn moved closer to the lead with more than a quarter-mile remaining and took the lead with 200 meters to go. The four-year-old filly Mabrooka (Mahabb x Shamayl by Kesberoy) closed from the middle of the field to be closest to RB Burn at the finish, losing by three-quarters of a length.

Sylvine Al Maury (Munjiz x Savavit Al Maury by Dormane) closed from the back of the field to finish third. Owned by the Royal Cavalry of Oman, Sylvine Al Maury won consecutive Group 1 races in Europe in the summer of 2016 — the Dubai Duty Free Hatta International Stakes for fillies and mares at Newbury Racecourse in England in July, and the Doha Cup against males at Deauville, France in August.

Paddys Day raced at the back of the field and was beaten five lengths. Sand Victor never mounted a challenge, while Thess Is Awesome raced near the front early, but faded in the final 1,000 meters.

RB Dixie Burning has won six of eight starts on the UAE circuit, but always against modest competition for Sheikh Khalifa and Lemartinel. A six-year-old, RB Dixie Burning followed her win in the Sheikha Fatima Ladies World Championship with a victory in the minor Bibi De Carrere Handicap at Abu Dhabi on December 11.

In the Ladies World Championship, jockey Walton guided RB Dixie Burning from a stalking position after a slow start to take the lead with a quarter-mile remaining. The mare finished 11/2 lengths in front of Babel D’Aillas.

“She was moving nicely,” said Walton, who is 29 and has won more than 120 races. “I only had to use my hands and heels, and once she got into the front on the final bend, she just pulled away. Jockey Tadgh O’Shea won with her last time and gave me a few points,” Walton said. “She won pretty comfortably and it is great to be here and to ride this winner.”

Qader led throughout the Sheikha Fatima Apprentice Championship at 1,600 meters. Owned by HH Sheikh Mansoor bin Zayed Al Nahyan and trained by Jean de Roualle, Qader was comfortably in front with a quarter-mile to go and won by an impressive 71/4 lengths over Ameer Al Reef.

“Dylan rode a beautiful race,” de Roualle said. “He knows how the pace is going, the speed is going, and that’s the base for a good jockey.”

Dunn was the second consecutive Australian-based rider to win the Apprentice Championship.

“It’s a massive thrill for me,” Dunn said. “I was able to get the horse to relax there in the front early on and getting it to switch back on. Once I was able to do that it was pretty much simple from there.”

The Apprentice Championship was the first win for Qader in the eighth start for the four-year-old colt in France and the United Arab Emirates. It was the start of a trend; Qader bounced back to win the minor Sweihan Handicap at Abu Dhabi on December 4.

Sharaf Al Reef ended a seven-race losing streak in the rich Sheikh Zayed Cup at 1,600 meters. The seven-year-old has raced extensively in the United Arab Emirates in recent seasons. The Group 3 Sheikh Zayed Cup was his first stakes win. Sharaf Al Reef struggled in Group 1 races last March, finishing fifth in the Liwa Oasis and eighth in the Emirates Championship, both at Abu Dhabi.

In the Sheikh Zayed Cup, Sharaf Al Reef closed from the back of the eight-horse field to take the lead in the final sixteenth and win by a half-length over Nahee. Sharaf Al Reef was ridden by Fernando Jara, who formerly rode in the United States.

Sharaf Al Reef is owned by Al Ajban Stable and trained by Abdallah Al Hammadi. His five career wins have all come at 1,600 meters at Abu Dhabi.

“Conditions obviously really suit him,” Jara said. “They went quick early and he has run on strongly in the final 300 meters to win nicely.”

Sniper de Monlau has won half of his six starts, and could have accomplished more if he had not shown erratic behavior drifting across the track in his losses. The National Day Cup was his first start on dirt, and was a well-earned victory. Sniper de Monlau broke slowly and closed from last to win the race at 1,800 meters, or 11/8 miles. He took the lead a quarter-mile from the finish and won by two lengths over Faucon du Loup.

“The trainer and his team have done a magnificent job with this horse, who is very talented but can be quirky,” said Ffrench. “He won two of his five races last season, and should probably have won at least two more but kept drifting right across the track at Abu Dhabi.

“He is a very good young horse who hopefully can build on this. It is great to win such a valuable prize.”

Gazwan has been highly regarded by trainer Julian Smart throughout his career. The win in the National Day Cup in Qatar on December 16 was Gazwan’s third win this year. He won the $1 million Emir’s Sword in Qatar, raced competitively in France in the summer and fall and won his first two starts of the 2016-2017 Qatar season. On November 16, Gazwan won an allowance race at 2,000 meters, his first start since a fourth-place finish in the Qatar Arabian World Cup at Chantilly the preceding month.

The win in the National Day Cup suggests the five-year-old Gazwan will play a leading role in the major stakes of the winter, notably the Emir’s Sword. Owned by Sheikh Mohammed bin Khalifa Al-Thani of Qatar, Gazwan was ridden by Richard Mullen who positioned his mount just off the early pace. With three furlongs remaining, Mullen guided Gazwan to the outside and easily took the lead in early stretch. Gazwan won by three lengths over Majeed, and 13/4 lengths over Al Majh’Hoor.

Gazwan has won four important stakes in England and Qatar in his career. He seems poised to accomplish more in 2017.

Steve Andersen is a correspondent for Daily Racing Form.