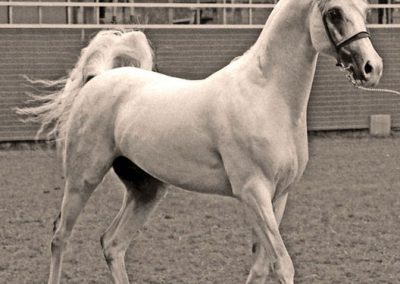 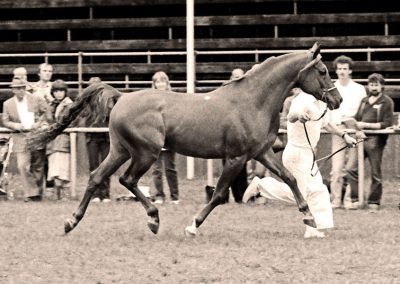 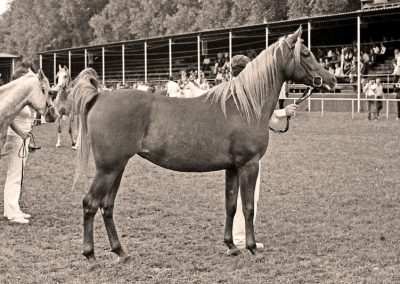 The first article I ever wrote for AHW was a report on the European Championships at Aachen in 1980. I was just a student back then, and I only did it because I had been very disappointed by the lack of coverage of the 1979 show. How times have changed!

Aachen is famous today for the All Nations Cup, but the show goes back longer than that, to a time when international showing was only just beginning. In 1980, it was officially the biggest Arabian horse show ever held in Germany, with 160 exhibitors, some 500 horses, and thousands of spectators. No European show can equal this today, not even the ANC.

One striking aspect about the 1980 show was the number and the success of the Russian Arabians bred at Tersk Stud, and their offspring. There had been imports from Tersk in Europe for over a decade at this point, mostly in Holland, but also in Germany. In 1980, these horses appeared in force and took most of the major prizes. All senior champions and reserves (no golds, silvers and bronzes then, just champions and reserves) were straight Russian, plus the reserve junior female champion, as well as many additional class winners. This trend would continue over the following years. Just one year earlier, the U.S. registry had finally lifted its ban on Russian Arabians and American breeders had begun to import them in large numbers.

One of those imports was the 1980 senior champion stallion *Muslin (*Salon x *Magnolia), who won the title for Robbie den Hartog’s Kossack Stud and blew everyone away with his spectacular movements. *Muslin was imported by Howard Kale Jr. and later syndicated, and many of his Dutch-bred get were also imported to the U.S. The reserve senior champion, Numizmat (Aswan x Nemezida), somehow escaped the exodus to the New World and remained in Belgium. He was a regular winner and an influential sire, more so than *Muslin, and is found in many modern pedigrees through his daughters.

Numizmat was owned (and shown) by Jozef Peeters, who was one of the first Arabian breeders in Belgium and founder of the Belgian stud book. He also owned the senior champion mare, Katun, yet another Tersk import. This exquisitely beautiful and feminine grey mare was one of the most prolific show champions of her day; with her extreme refinement, you might say that she was the Pianissima of the early 1980s. Her breeding was given as Aswan x Kapella, but thereby hangs a tale which, sadly, has no happy end. Blood testing eventually revealed that the beautiful Katun was not who her papers claimed she was. It was one of several cases where the papers of Arabians from Russia had somehow become confused. But, while in other cases it turned out to be a simple switch and the horses could be matched to their proper papers, Katun’s true identity was never established. As a result, she and her produce were unceremoniously evicted from the Arabian stud book and demoted to Half-Arabian status. It’s a pity, because there could hardly be any doubt that Katun was a purebred Arabian; but that was the end of it.

Her reserve champion had no such problems. The fabulous Neschi (Kilimandscharo x Nevada) was a double Aswan granddaughter bred and owned by Silvia Garde-Ehlert, and her very dished head would be considered “exotic” even by today’s standards. Neschi followed her star turn in the showring with an equally stellar performance as a broodmare. She produced the European and ANC champion stallion Nadir I and the Elite mare *Nascha, whose granddaughter Essteema was the first female to win the Triple Crown. They all had Neschi’s extreme head, and their descendants are still winning today. Neschi’s younger full sister Neschima was Reserve Junior Female Champion at the same show, but while she was every bit as beautiful as her sister, Neschi proved the better broodmare.

It was this show that generated the first objections in Europe against the American style of showing. Heavy criticism was leveled against oiled faces and even more against stretched posing, pointing out that it is not possible to judge a horse’s conformation like this. Which, among other things, tells us that back then, horses were actually judged on honest-to-goodness conformation and movement, not on style and presentation. Small wonder those Russian horses did so well.

So what’s different now, thirty-seven years later? Both horses and showing have changed and developed dramatically, but I would hesitate to speak of progress. From today’s perspective, the “excesses” of 1980 appear very moderate. Everything is more professional now, whether it’s styling and conditioning or training and handling, and far more glamorous. But are the horses any better? I doubt it, if only because there wasn’t much that could be improved. Those champions from 1980 still look pretty good today. With the benefits of modern professional conditioning and handling, I am sure they would still be winning — with higher leg scores, too.