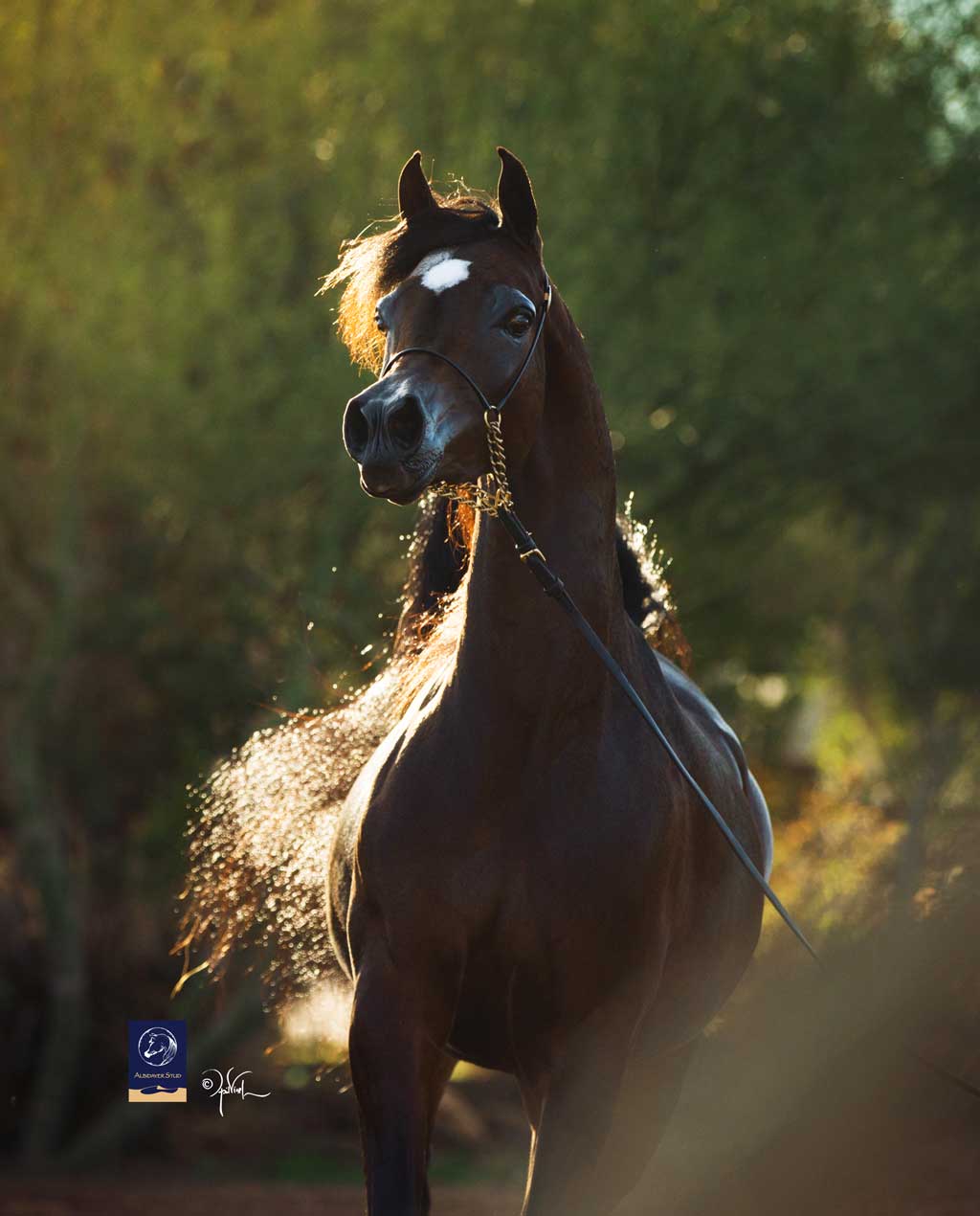 Pitonisa AS (Ever After NA x Psyches Amber Dream) started her final tour for owner Albidayer Stud with Sandro Pinha at the lead at Mid-Summer Nationals. This heavily decorated mare is gracing spectators with a few, select final appearances in U.S. show rings before her official retirement. Pitonisa AS earned her National Championship unanimously. 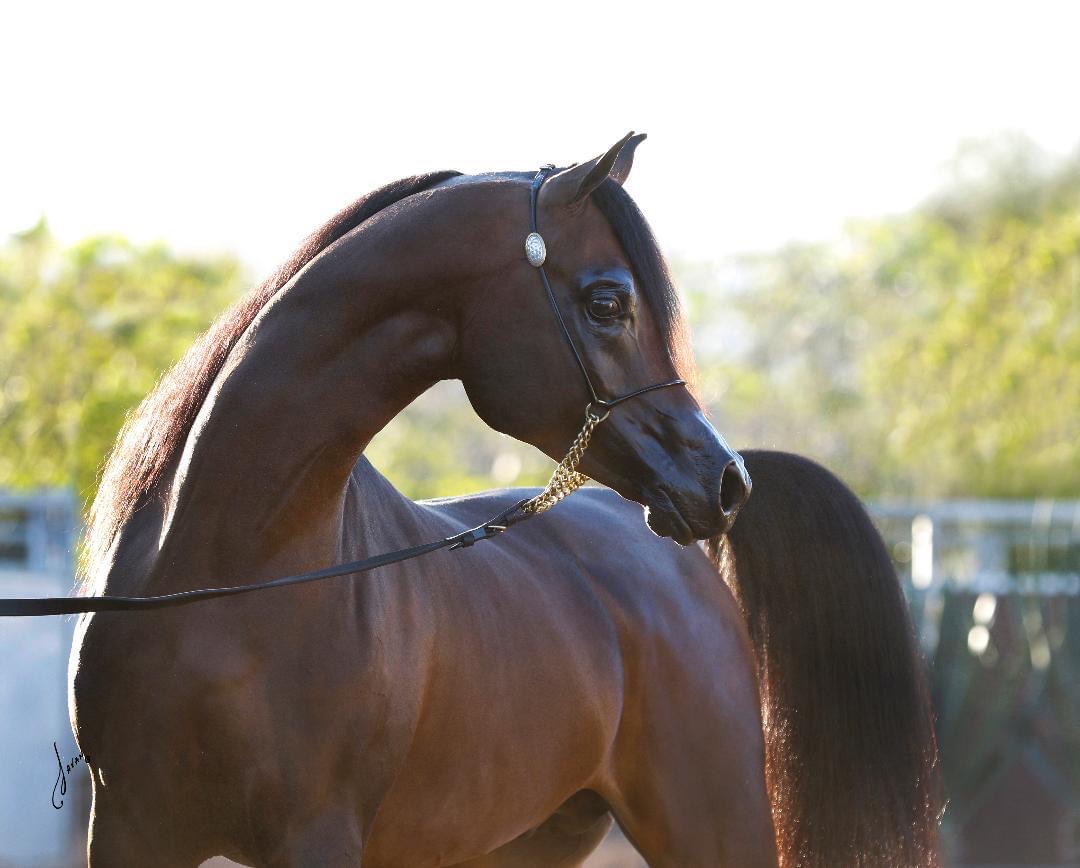 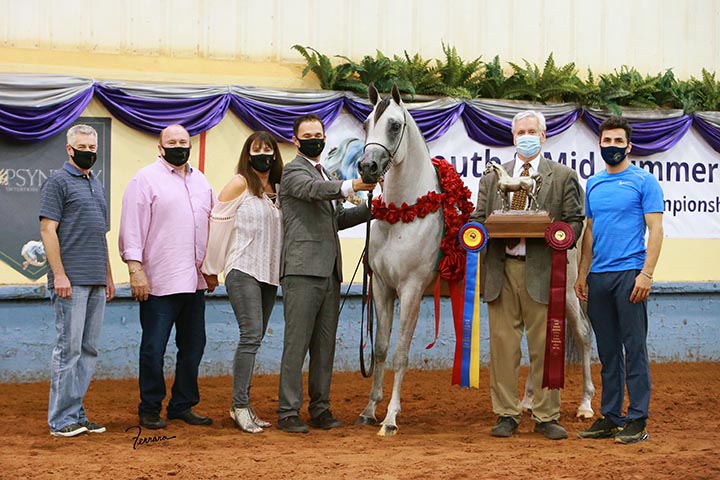 AJS Emara Meia Lua (S.M.A.Magic One x Ellara El Ludjin) is a beautiful two-year-old filly tracing to El Dorada in her tail female line. She is owned by Manny Vierra and was crowned unanimous National Champion with Sandro Pinha. This filly’s win is sentimental as it brings back El Dorada to Valley Oak Arabians, the farm that leased her from Michalow state stud and brought her to the U.S. for her campaign with Greg Gallun. 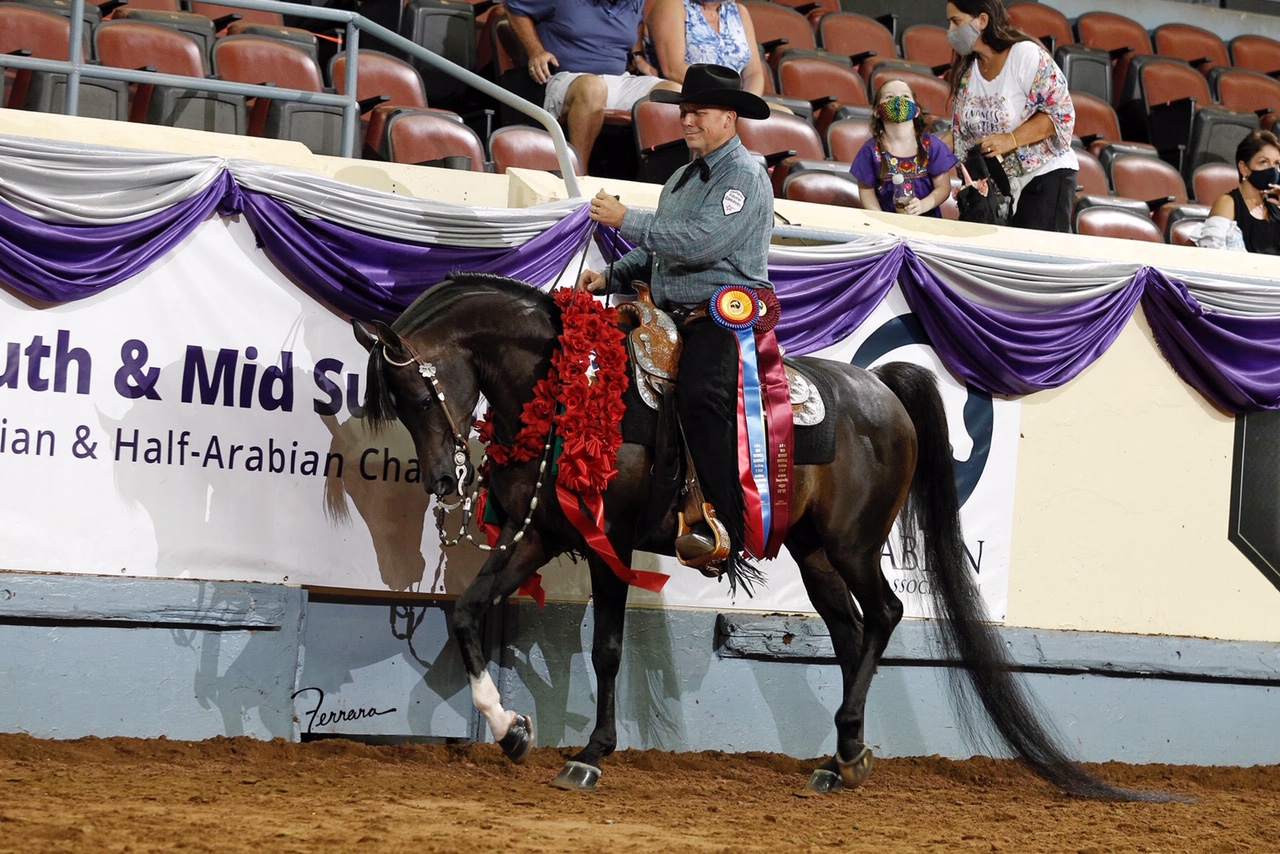 Enzperation XX (Enzo x Olivia D) is a beautiful 2009 stallion with a long career in the show ring. Owned by Shamrock Farms, Enzperation has spent the majority of his career as an amateur horse capturing titles at every major show in the U.S. Although, he was named 2018 Canadian National Champion Western Pleasure Open horse as well. Enzperation XX won his cut and took home the big prize in the finals in a field with many previous U.S. National Champions. 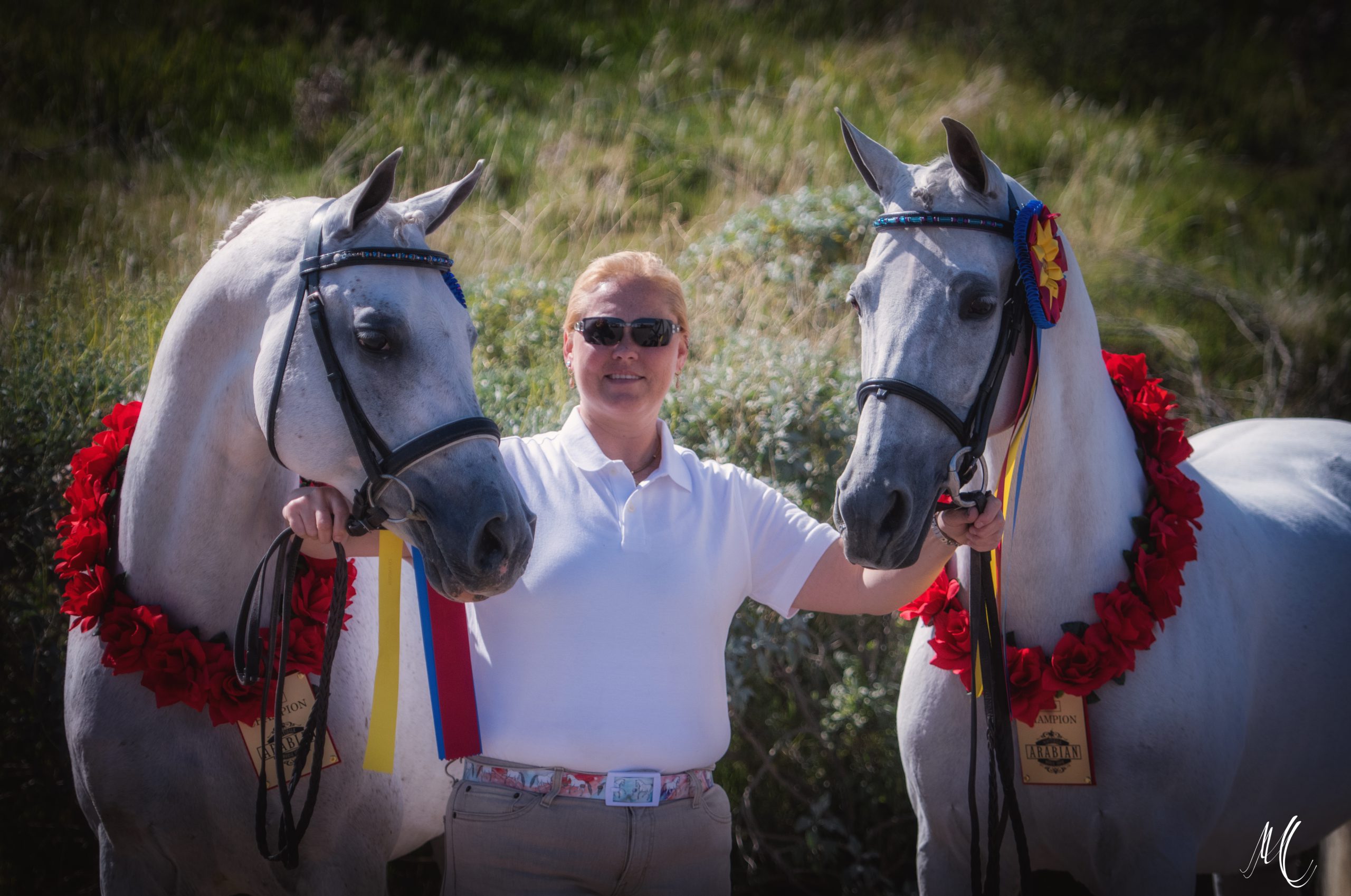 VA Ralvon Crusader (Silver Gent x Cavu Ralvona) is a frequent competitor at Sport Horse Nationals in the in-hand (multi-National Champion), dressage, under saddle, and show hack divisions. Crusader’s owners Magic Moments Stables made the trek to campaign him to Mid-Summer Nationals in this unique opportunity to showcase sport horses in open and adult divisions alongside main ring competition. Crusader and owner Granger Durdin-Pugh were rewarded with Champion First Level Dressage Amateur which was Crusader’s first National Championship in performance. 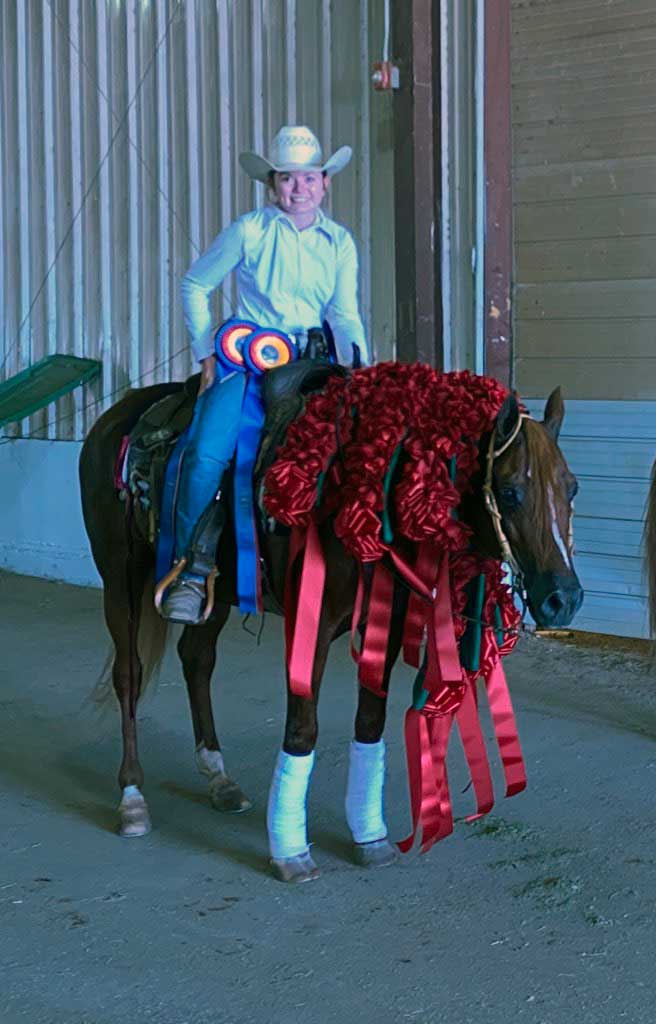 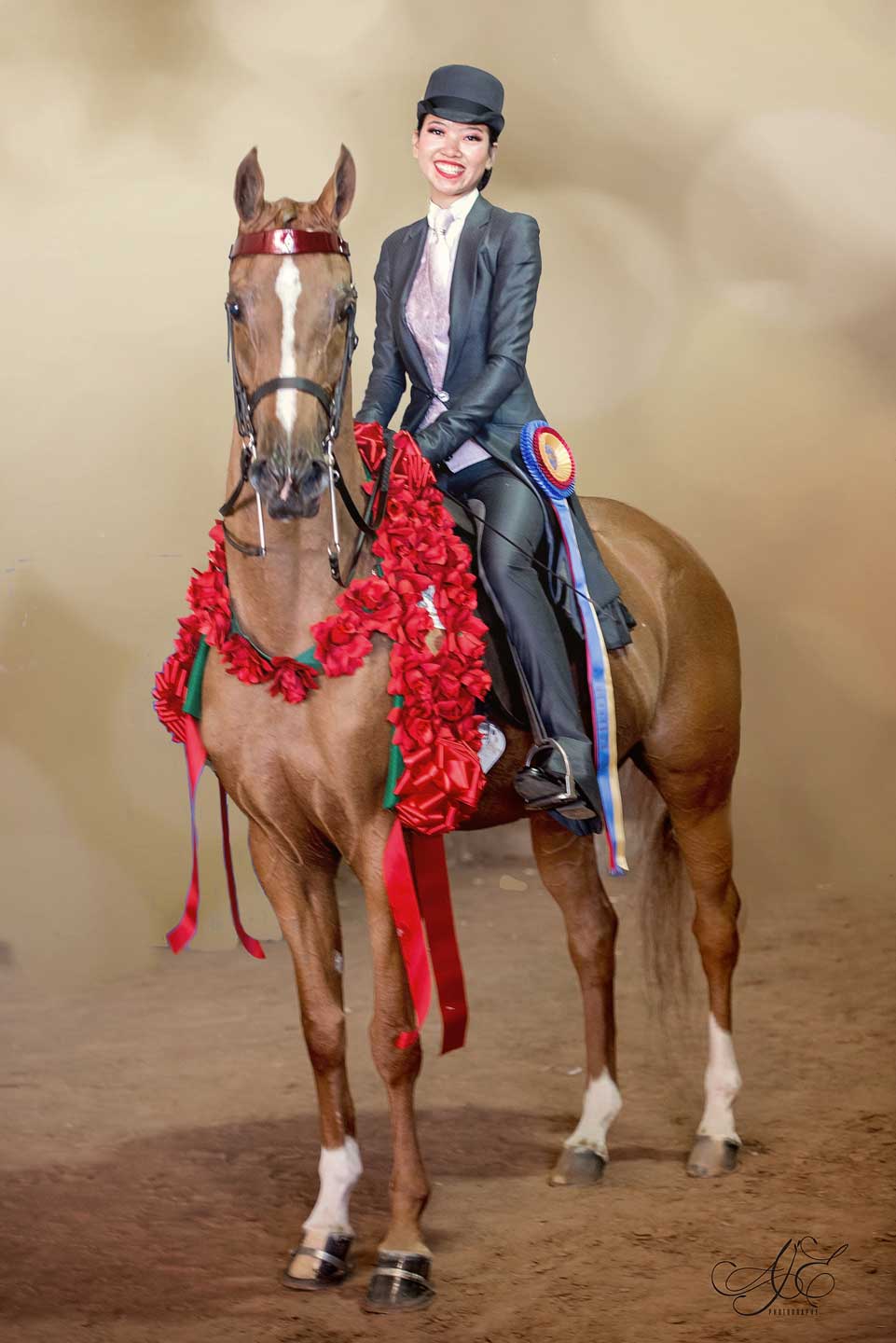 Sophie Yih is a formidable competitor whose name is commonplace to hear over the loudspeakers in the saddleseat divisions. This incredible junior exhibitor shows with Stachowski farms and decorated their stalls with a staggering seven (four unanimous) of Stachowski’s 20 National Championships from the show, two Reserve National Championships, and a third place. Sophie’s wins were with both purebred and Half-Arabians in show hack, country, English pleasure, and equitation. 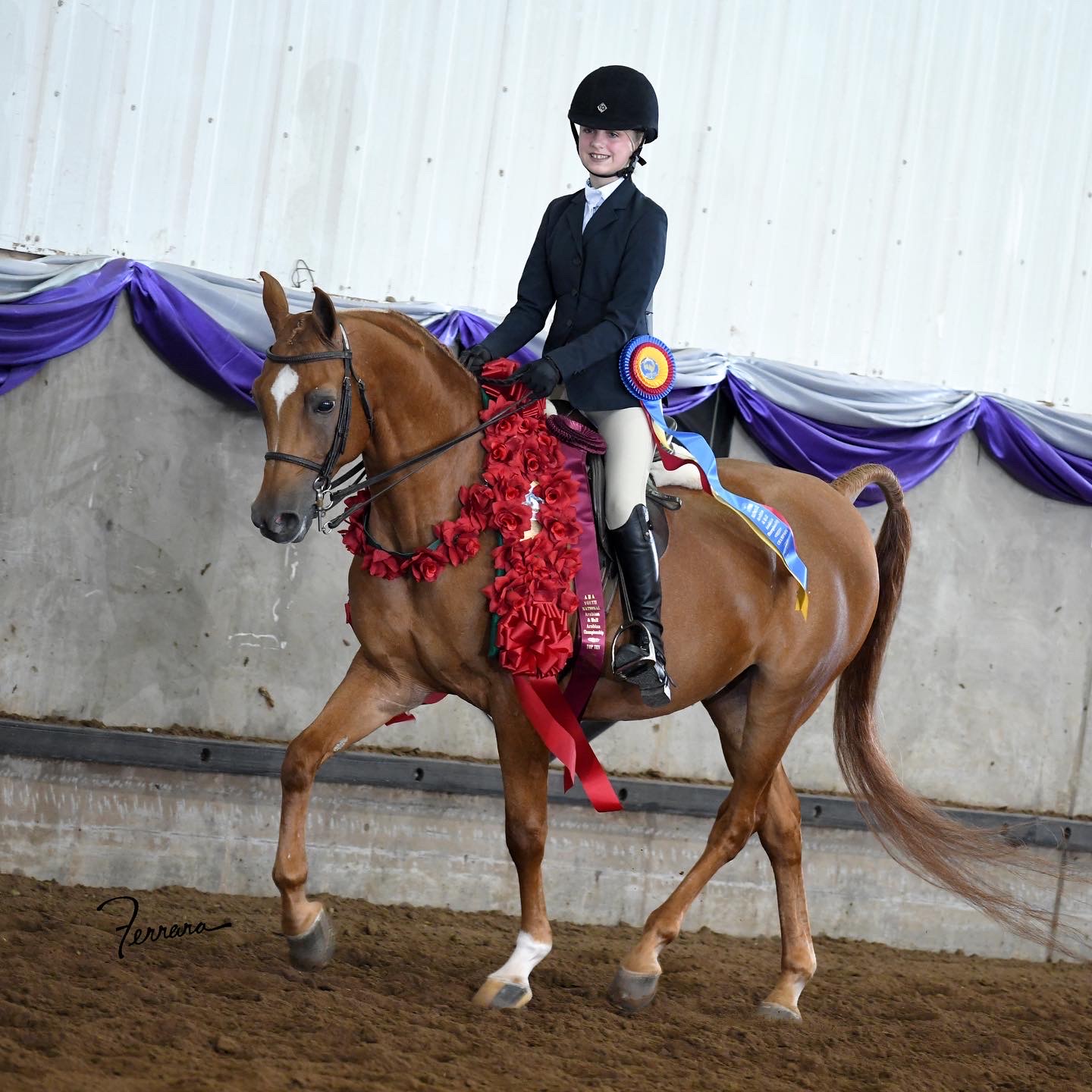 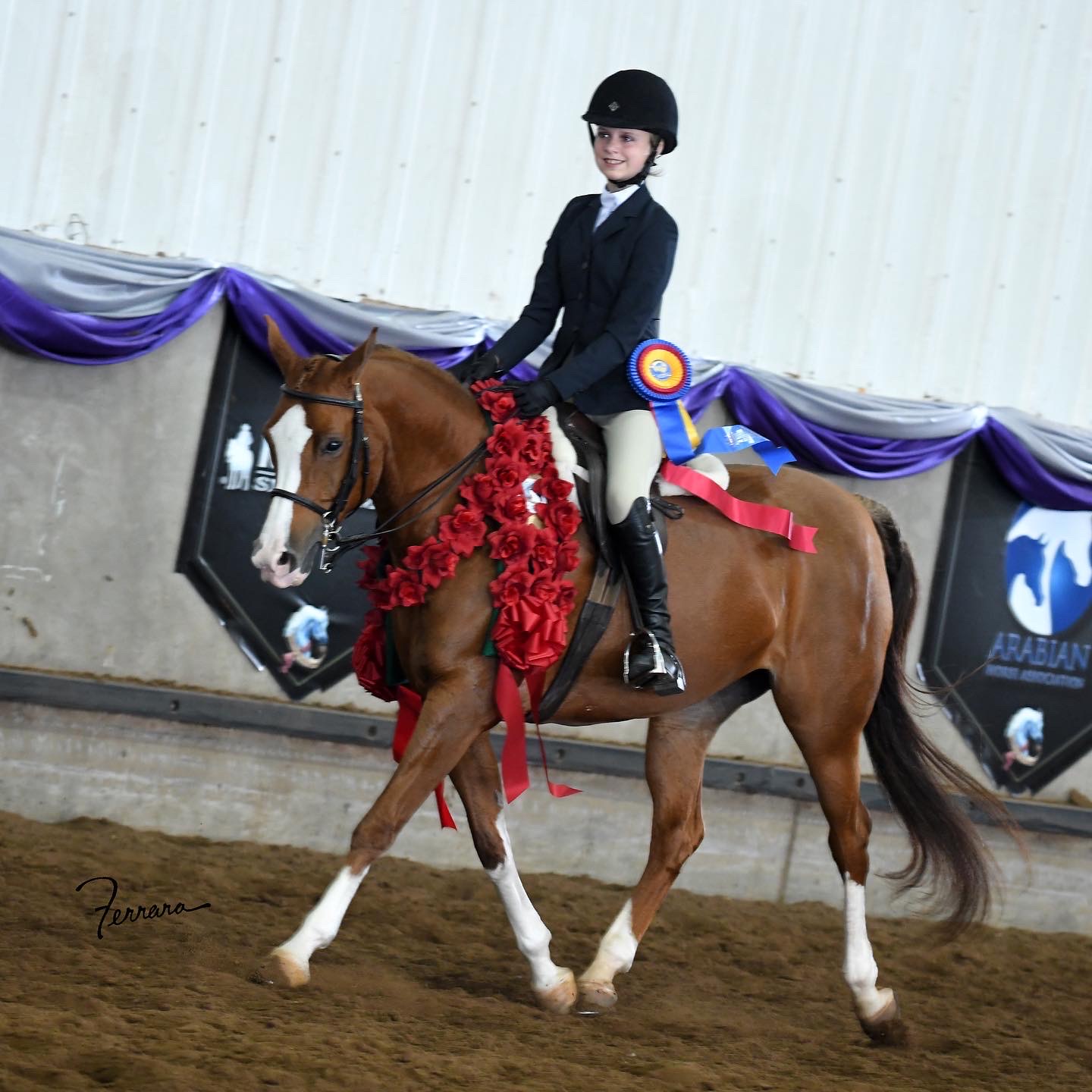 Early in the pandemic, the Arabian Horse Association vowed to provide exhibitors an opportunity to compete, and the Association remained true to its promises. The annual Youth National show became the perfect opportunity to bring the community together in a single competition, with no qualification hurdles, to welcome all exhibitors. It was through this commitment that the first, and potentially only, “Mid-Summer Nationals” was born. A combination of working western, sport horse, halter, and main ring events were offered for amateur and professional exhibitors. While the show combined with the Youth Nationals competition, each show retained their own logos, names, and trophies to maintain some separation of the two events.
Without precedent, and in the current climate of the pandemic, the association was unsure of the potential turnout. AHA worked with USEF to create highly restrictive safety protocols including social distancing requirements, elimination of non-exhibitor spectators, free hand sanitizer at all arenas, and a mask requirement. Exhibitors were threatened with ejection should they not comply with the rules. As a result, the show environment was as safe as AHA could cultivate. With the safety assurances and the allowance for entries close to the show start date, AHA was rewarded with nearly 1,500 horses in attendance and 4,200 class entries. Comparatively, this is double the amount of Canadian Nationals class entries in 2019 and double the amount of Youth Nationals entries in 2019.

Beyond the impressive number of horses, the quality of competition was unrivaled. Displaced halter competitors who were on path for the Arabian Breeders World Cup brought out recently imported and purchased stars for presentation, including the internationally decorated FAM Donatella (Dominic M x D Crystal Moon) (Mid-Summer Reserve National Champion Two-Year-Old Fillies), and many-time Champion Pitonisa AS (Ever After NA x Psyches Amber Dream) (unanimous Mid-Summer National Champion Senior Mare – the first jewel in her crown on her final show tour).

Manny Vierra of Valley Oak Arabians selected Mid-Summer Nationals as the debut for his beloved AJS Emara Meia Lua (S.M.A.Magic One x Ellara El Ludjin) , a two-year-old grey filly purchased from the 2020 Marquise auction, and Preludio OSB (Dominic M x Partyssima OSB), a Brazilian National Champion Stallion that Vierra recently imported to the United States. Emara brings home the tail-female line of Bronze World Champion Mare El Dorada (Sanadik El Shaklan x Emigrantka), who Vierra leased from Poland to show in the U.S. with Greg Gallún. Emara entered one of the most competitive classes of the show, the two-year-old fillies, with previous international and world cup champions, where she emerged victorious with a unanimous National Championship with Sandro Pinha on the lead. Preludio OSB and Pinha followed up Emara’s big win with unanimous Mid-Summer National Champion Stallion for an elated Vierra.

2020 also saw the return of the “Opportunity classes” designed so that youth exhibitors who weren’t prepared to attend Youth Nationals this year could enjoy the experience of a National Show environment at a much lower expense. Exhibitors in this division have the opportunity to show their own horse or someone else’s horse entered in the show, but they do not have the option to cross enter as riders or handlers into the championship classes. This move towards inclusivity has encouraged new riders to attend and compete.

Youth exhibitors, regardless of the limited activity schedule, flocked to the show (some with larger show strings than in previous years). The incredible Sophie Yih, a youth rider in the 14-18 division, competed on five horses, amassing an impressive haul of seven National Championships (four unanimous), two Reserve National Championships, and a third place all in the saddleseat division (show hack, country English pleasure, and equitation).

Riley Lallo, a competitor in the 10 & under division, finished out her final year as a walk/trot rider on her six horses with six National Championships (two unanimous), two Reserve National Championships, and eight National Top 10s. This impressive and versatile young rider captured titles in both purebred and Half-Arabian classes: western seat equitation, hunt seat equitation, western pleasure, hunter pleasure, sport horse under saddle, short stirrup reining, trail, showmanship, and sport horse in hand.
Mid-Summer Nationals also hosted the first Performance Halter National Championship classes. This new division has $125,000 dedicated in prize money from the Arabian Breeders Sweepstakes to be handed out at U.S. Nationals. In advance of the U.S. National debut, AHA made the move to include the new classes at Mid-Summer. The support for the classes, even in absence of the prize money, was staggering for its debut. Forty-two horses competed among the four classes (purebred and Half-Arabian geldings and mares). This division, similar to sport horse in-hand, evaluates horses for form-to-function for their specific discipline. Unlike sport horse in-hand classes, the horses are judged by Arabian performance judges in terms of their suitability for their individual disciplines.

In the midst of the pandemic, creating a show like this on a short timeline seemed like a near-herculean task, but the AHA’s last-minute event was, overall, embraced readily by an excited community of restless exhibitors. With the world still in turmoil as it faces the battle against an ever-present viral threat, Mid-Summer was a welcome reprieve from the challenges facing us all. 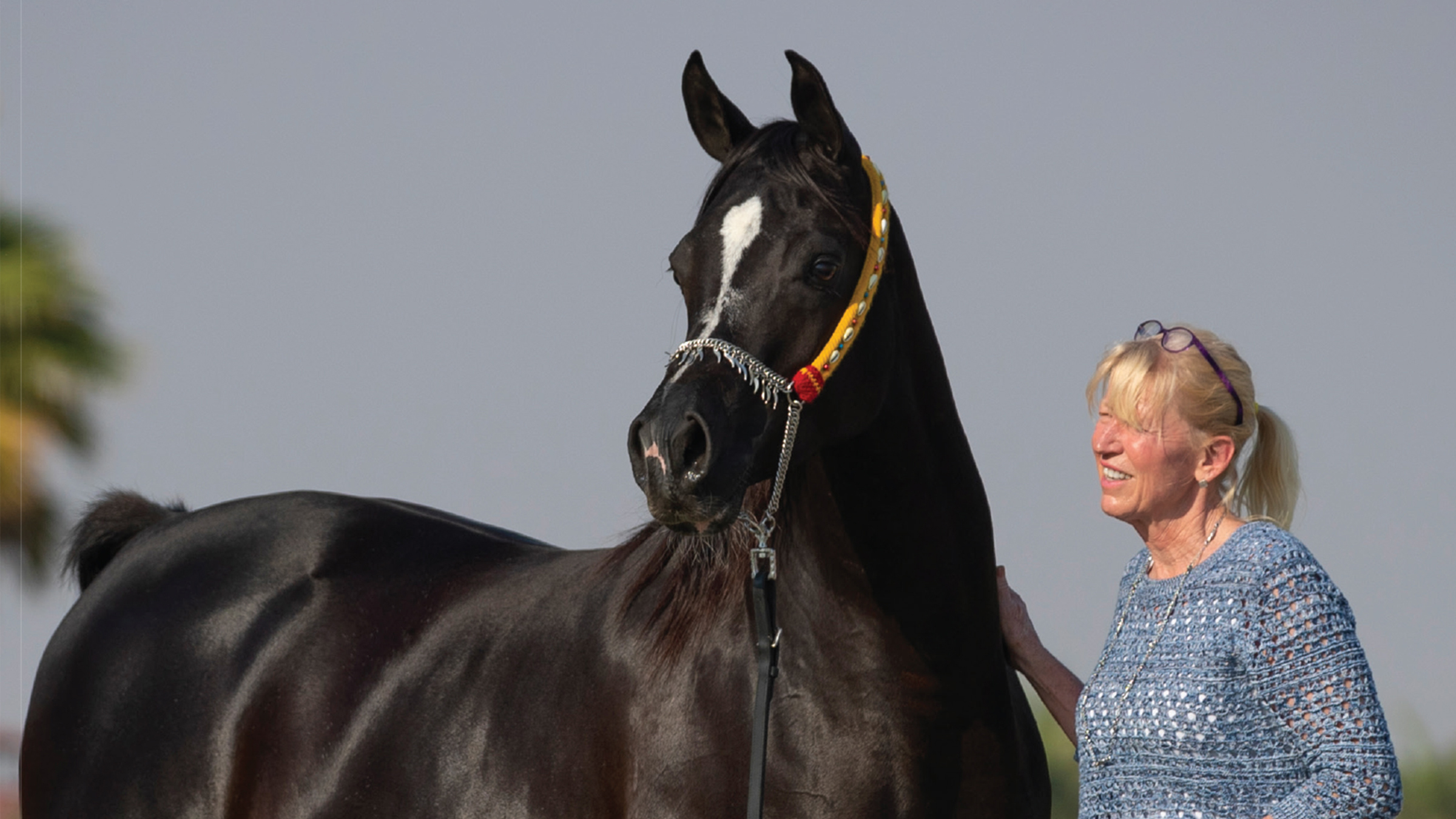