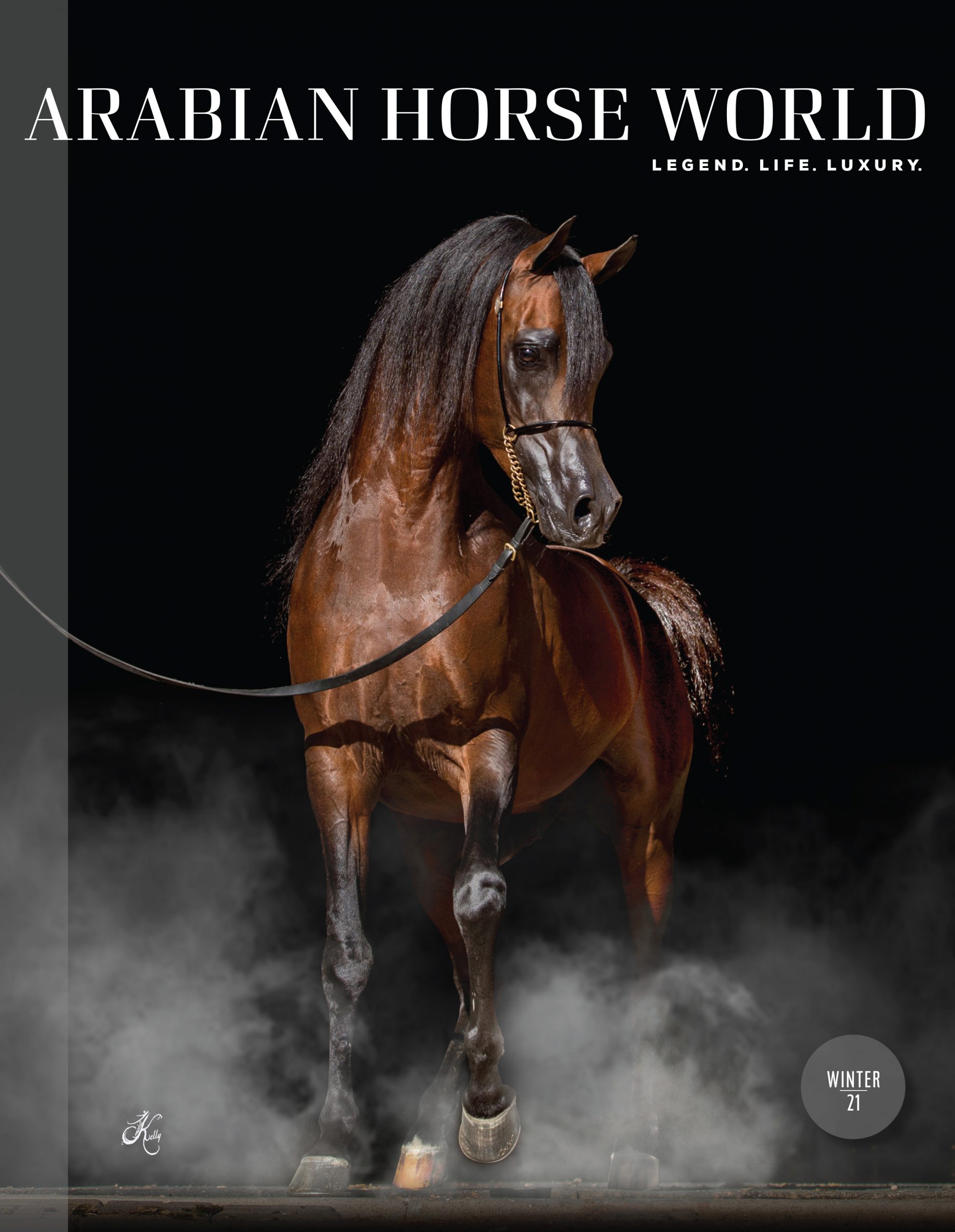 33
Shawn Crews International
Charting a new course from her quaint farm in Texas, by Jeffrey Wintersteen

108
Moments In Time: Planting the seeds, 1989
I come from a decidedly non-horsey background. But the seeds were planted early in my childhood by perhaps the most unlikely person: my grandfather, by Betty Finke

110
Sire Line: *Mirage DB
*Mirage DB was one of the best and most beautiful desertbred stallions imported to europe in the 20th century. But his breeding career there never happened. Instead, his line returned from the U.S. to conquer not only Europe, but the entire world, by Betty Finke

121
COVER STORY: EKS Alihandro – The Untamed
“In a time when quite a few horses have lost the ‘joie de vivre’ and the pride of being an Arabian, Alihandro is both exemplary and necessary.” by Jeff Wallace and Evie Tubbs Sweeney

137
The Masterpiece of Al Shaqab — Celebrating the artful diversity of the Arabian horse.
By skillfully drawing from all the world’s most precious Arabian bloodlines, Al Shaqab has enhanced the breed in immeasurable ways, by Jeff Wallace and Evie Tubbs Sweeney

169
You Be The Judge
Think you know how to evaluate conformation? Test your judging skills, by Cindy Reich

172
Sport Horse Nationals
Exhibitors were thankful for the opportunity to present their horses after months of cancelled competitions, introduction by Morgan Moore

182
U.S. Nationals: Halter and Performance
“After a year of sporadic equine events and isolation the show environment felt a bit foreign. Attendees cautiously greeted one another, yet there was excitement in the air.”

190
Totally TOPS
AHW salutes the leading professionals and amateurs at the national level in 2020, research by Douglas Tatelman

196
My Life with the Arabian Horse: Manny Vierra
“The Arabian horse is a huge passion for me – a passion that became an addiction.” by Denise Hearst

199
Twisted Tales
Never look a gift horse in the mouth, by Darice Whyte

202
Friends of the World: Loraine Snyder
Meet a woman who has been breeding Arabians and Half-Arabians for 52 years. She has shown Arabians at Madison Square Garden and ridden thousands of miles of trails, by Jackie Lachut

62
News of the World

107
Your Farm Story, Large or Small

8
What in the World: A Breeder Went Away, by Denise Hearst