In this Issue: January/February 2020 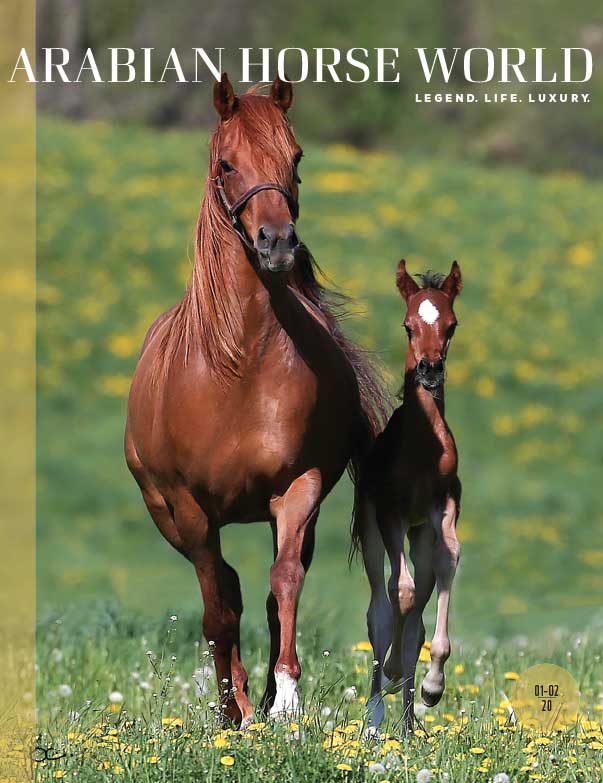 32
Totally Tops
The leading professionals and amateurs at the National level in 2019, research by Douglas Tatelman

80
Brave New World
Globalization, technology, and their impact on the Arabian breed, by Betty Finke

89
Cover Story: Conway Arabians — A Renaissance
Retooling a 20-year-old breeding program with an eye to the future, by Gary Dearth

146
Moments In Time: Summer in Poland, 1989
From 1986 to 1990, I traveled to Poland each year for Arabian Horse World. Things were very different then. I’d like to believe that one day, I might go back there and find that the Polish Arabian has survived the crisis and come through unharmed, as it has  so many times before, by Betty Finke

148
Sire Line: Ursus
Despite his allegedly enormous purchase price, the stallion Ursus was barely used by the Spanish government. It was only after he had been discarded in his old age that he went on to found one of the two most important sire lines of Spain, by Betty Finke

156
Twisted Tales: A Change of Plans
by Darice Whyte

5A
My Life with the Arabian Horse: David Conner
Bridging the divide between sport horse in-hand and main ring halter, by Denise Hearst

177
You Be the Judge
Appraising conformation with performance in mind, by Cindy Reich

182
Phantom Night — A story of love and loss
When 28 years together is not enough, by Nicole Toren

”S” refers to placement within the Scottsdale Signature Stallion Brochure beginning on page 39.

4S
Table of Contents and Board of Directors

138
Arabian Horse World Championship, Paris
As is the norm, most of the youngsters shown here now are über-refined, bay, with incredibly exotic, exquisite faces, neat little heads, and ever tinier muzzles … by Caroline Reid

8S
AHW: Relationships,  Support, Got Your Back, Partners

10
What in the World: Arabians and the 2020 Rose Bowl Parade

179
Stud Farm Diaries: January on the Stud Farm is the Month of Hope, late winter tasks and the beginning of foaling season
by Cindy Reich