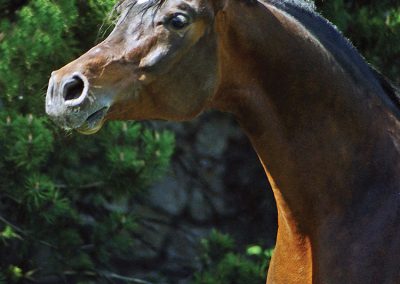 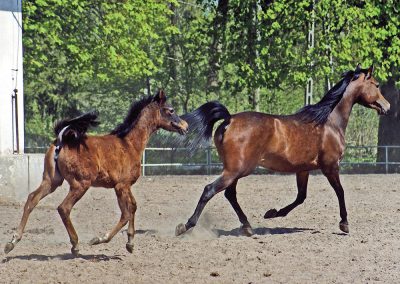 Pianosa and Pianissima at Janow Podlaski in 2003.

Pianosa and Pianissima at Janow Podlaski in 2003.

I have been to Poland and visited its state studs several times, starting in 1986. Purely by chance, two of the years I went there turned out to be pivotal. The first of these was 1994, when my visit happened to coincide with the lease of Monogramm and the arrival of his first foals. The next time I went was in 2003. And something very similar was happening …

Fifteen years is not a very long time, objectively speaking, but looking back, 2003 seems like a different world. Back then, the Polish state stud farms were still as many of us knew and loved them. They were being run by capable directors who knew what they were about. These men were the guardians of a unique heritage dating back over 200 years. But they were also horse breeders, and they knew that from time to time, even an ancient and consolidated breeding program may be in need of a fresh impulse. One of the earliest in modern times had been provided by Palas (Aswan x Panel), the three-quarter Egyptian sire from Russia who became so significant that no one ever tried to argue that his foals could not be termed “pure Polish.” But that depends on how you define the term. His blood was not Polish (or rather, only in part), but he was used by the Polish state studs, and that is what makes his offspring “Polish.” Then there was Parma (Aswan x Pokaznaja), Palas’s paternal half-sister, making her technically half Egyptian, but she brought back to Poland a vanished branch of the old Polish family of Milordka. Similarly, even earlier than Palas, the mare Piewica (Priboj x Wlodarka) had been imported from Russia specifically to reintroduce the lost family of Szamrajowka. It worked a treat, too, since this is the origin of Janow Podlaski’s hugely successful “P” family.

Bringing back bloodlines that had been lost in Poland was something of an ongoing project. In the 1980s, Probat (Pohaniec x Borexia), bred entirely from old Polish lines in Sweden, was brought in to bring back the lost sire line of Kuhailan Afas. That didn’t quite work (or at least only temporarily), but he did a stellar job siring broodmares in Poland. A decade later, Monogramm (Negatraz x Monogramma) was a similar case. He was close enough to being pure Polish that it hardly mattered, and he represented the sire line of Kuhailan Haifi, which had also been lost at the state studs. His success equaled, if not surpassed, that of Probat, as he not only sired superb mares, but also left a strong sire to carry on, Ekstern.

But then in 2002 and 2003, another decade on, the time had come for another experiment that was just as daring as the introduction of Palas had been some 30 years earlier. A stallion came to Poland who was out of a dam, Kajora, of predominantly Polish breeding, going back to the original Polish foundation mare Woloszka. Similarly to Palas, his sire Anaza El Farid was straight Egyptian, going back to Nazeer. Unlike Palas, he was already famous and carried the title of World Champion. His name: Gazal Al Shaqab.

When I visited Poland together with a group of breeders from Germany in 2003, Gazal Al Shaqab had already finished his term at Janow Podlaski and was residing at Michalow. His first foals were already on the ground, quite a lot of them, and a few at Michalow as well. To be truthful, we were not terribly overwhelmed. Sure, they were cute foals, but then, foals are generally cute. Most of the Gazal babies were bay, very woolly, and, at least at that stage, looked a bit shortish in the neck department when compared to the usual Polish horses. It simply wasn’t a case of “Wow, look at that!” More a case of “Well, let’s wait and see.”

So we waited. And eventually, like everyone else, we saw.

If there’s a lesson to be gained here, it’s to not set too much store in first impressions.

I’m pretty certain not one of us had the slightest suspicion of what would eventually come from that latest experiment. But, come to think of it, the Monogramm foals back in 1994 hadn’t looked all that exciting, either. Sometimes you just have to wait a while, let things develop at their own pace. You might be surprised.

I sure was, and it happened just over a year later. In September 2004, an ethereally beautiful, impossibly refined, bay yearling filly entered the show arena at the All Nations Cup at Aachen. She was bred and owned by Janow Podlaski, by Gazal Al Shaqab out of Pianosa, and her name was Pianissima. She took everyone’s breath away; she would win everything there was to win that year, and she would do it again later. And again. She became the poster girl of what might be termed New Janow — the idol and the gold standard of a whole generation of breeders.

It took a while until the realization hit me, and when it did, it hit pretty hard. This supreme beauty, this impossible artist’s dream become flesh, was one of the foals I had seen at Janow Podlaski in 2003. This was one of the little woolly bay babies with shortish necks, indistinguishable at the time from all the other little woolly bay babies with shortish necks. No, I definitely couldn’t say that she stood out in any way. If she had, I’d sure have tried to get more photos of her than just the one!

This proves that sometimes you find yourself in the middle of history unfolding, and you don’t even know it. It also provides another lesson: Don’t give up on those little woolly ducklings. They may turn out to be swans after all.