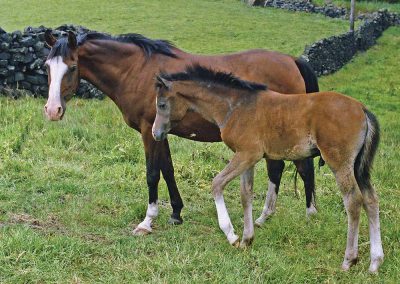 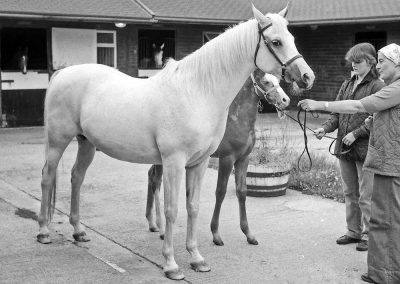 Ermine Shadow (White Lightning x Velvet Shadow), none too pleased with the weather.

Ermine Shadow (White Lightning x Velvet Shadow), none too pleased with the weather. 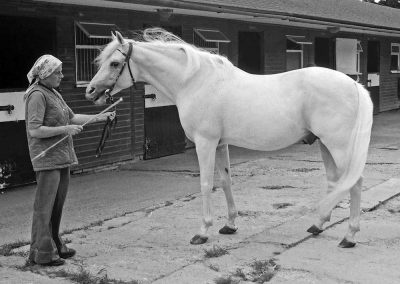 A Windy Day on the Hills

When you visit many stud farms, you see a lot of foals. As the years pass, the majority are never heard of again. But once in a while, you come across that one, very special foal — though you don’t realize it at the time.

Forty years ago, in the summer of 1979, my parents and I spent our annual vacation in Yorkshire, in the north of England. This was slightly off our usual route, and it remained the only time we ever visited that area. We went to see all sorts of places, from the centers of industry to the picturesque ruins of medieval abbeys. My particular highlight was a visit to the old parsonage at Haworth, home of the Brontë sisters. Being a student of English literature at the time, I loved their work and was fascinated by the story of this remarkable family. The location was appropriately bleak and windswept, like a scene straight from that most iconic of all Brontë novels, Wuthering Heights.

As always, we also visited Arabian studs in the area. I usually chose the farms based on their advertisements. One that I had particularly singled out that year was Souter House Arabian Stud, owned by the Greenwood family. I had encountered some of their horses before, at the very first Arabian show I had attended, back in 1972. There had been a very sweet filly called Ermine Shadow, a yearling at the time, but already nearly white. I had only seen her in her stable, but she had left a lasting impression. She was by White Lightning out of Velvet Shadow, whose sire Bey Shadow I had also seen at the show, and I was especially hoping to see her parents.

Souter House was located on the top of a hill, with an impressive view of the surrounding landscape from the stables. It was very windy on that particular day. Mrs. Greenwood showed us the stallions and the fillies in the stable yard, and because of the strong wind, they all tucked in their tails and looked a bit grumpy. Not the best preconditions for taking photos, but who could blame them! Bey Shadow (Bright Shadow x Farette), now 18 years old, suffered the inimical conditions with patient dignity; having inherited the calm Bright Shadow disposition, nothing upset him that easily. White Lightning (Burkan x Latawica) clearly did not care much for the weather, judging by his face. These two stallions were very different from each other: Bey Shadow a typically old-fashioned Crabbet horse with strong bone and quarters, while the predominantly Polish White Lightning was prettier and more refined. Both were excellent individuals, though, and they complimented each other perfectly. What better proof than the lovely Ermine Shadow, who, much to my delight, was also brought out for me to see. She had grown into a beautiful white mare and had a pretty filly foal at foot by the farm’s other Crabbet stallion, Platinum Phantom.

After we were finished in the stable yard, Mrs. Greenwood took us down into the pasture where the mares and the older foals were. Being a bit lower down on the hill, it wasn’t quite so blowy there. There were four or five mares in that field, including a visitor or two, and several foals, all of them colts. Ermine Shadow, bless her, had produced the only filly at the farm that year.

And there, too, was her dam, Velvet Shadow. Like most of the Bey Shadow mares, she was not that impressive: a small bay mare with a broad blaze and three white feet, a small splash of white on her belly, and a perfectly straight face. But experienced breeders will tell you that, very often, such unassuming mares make the finest producers. This, after all, was the dam of the beautiful Ermine Shadow! And she had a full brother to Ermine Shadow at foot: a tall colt, as yet unnamed. He was shedding his bay foal coat, coming out grey underneath, and looked a little moth-eaten in the process. He had a very pretty head; in fact, he was easily the typiest foal on the farm. He also had a splendid shoulder and quarters and good strong legs, and he was clearly going to be taller than his dam.

Back home after the vacation, I got my photos developed and sorted out, and a while later, sent some of them to the breeders we’d visited, as I always did, by way of a thank you. I also used these occasions to ask for any missing names of the foals. And in due course, a letter came back from Mrs. Greenwood with the names.

Souter House usually chose quite colorful names for White Lightning’s get, such as Sudden Storm, White Cascade, or Lightning Shadow. So when I got to the name of Velvet Shadow’s colt, I paused, both surprised and just a little irritated. It was an unusual name for an Arabian, and it was also misspelled. Come on, really — Carmargue? What were they thinking? But it
did have one thing going for it: it was different.
It was distinctive.

Little did I suspect that, six years later, everyone involved with the Arabian breed would know that name, because it belonged to a World Champion. Another few years, and it belonged to one of the all-time great sires of the breed, a familiar name in pedigrees all across the world. These days I need to remind myself how “Camargue” is spelled properly when referring to the area in France, not to the horse, and I’m probably not the only one! He was just one of the boys on a Yorkshire farm when I first saw him, if an uncommonly pretty one; but he went out into the wide world and became a star, and made sure that his unusual and distinctive name will never be forgotten.